It’s been a busy few months since my last post. The purple baby sweater ﻿and my Hiro just needs buttons.

I decided to hand sew the reinforcing on either side of where I planned to cut. I was going to mahine sew it, but because I was quite comfy on the couch marathon watching the Newsroom with my husband I decided hand sewing was a better option.

I took a little different approach and picked up and knit the button bands before cutting the steek. This was a) to prolong cutting my sweater and b) the yarn is superwash and I didn’t want to stress the cut ends while knitting the bands.

The cutting part went quick. Not sure why I was so stressed about it.

After cutting I tacked down the edges by using a blanket stitch and some waste yarn. I plan to add some ribbon to better reinforce it, but have not gotten to that point yet. 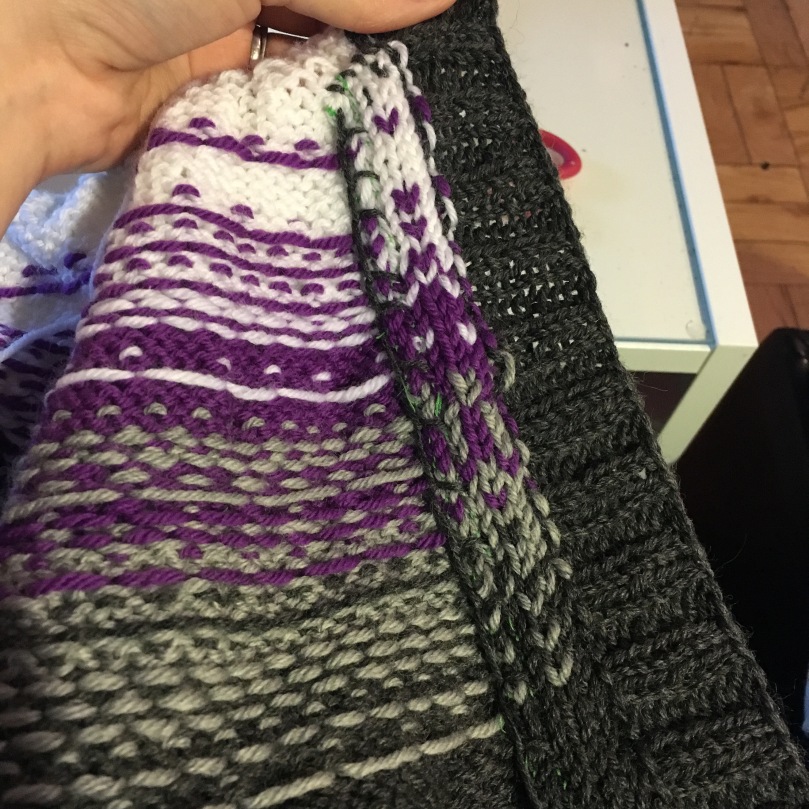 Once all that was complete it was time to graft the armpits. Here I hit an unexpected snag. I had misread at some point and did not have the right amount of stitches to graft. It happened to be 7 stitches on one needle and 14 on the other.

I made it work. It looks great too.

All that is left is adding the buttons. I don’t expect to have those on until it is cool enough to wear a sweater. Right now with triple digit heat I am in no mood for sweater finishing.

I did take the sweater to ZK retreat and got a pic with my friend Cori (irocknits) as she really helped me with this sweater and is the proclaimed Hiro Queen (she has knit 15 or so of these).

There is enough leftover that I could probably knit a kid sized one for Evelyn. And I might. Haven’t decided yet.