We now have a window!!!  It looks a bit different now as all the cement board for the tile is up around it.  This is one of those things where when we started working at replacing it, the time was somewhere around 4pm. By 12am (yes, midnight!) we had it in place. We ran into some small problems with some rotten wood from folks not installing replacement windows correctly over the years so we had to fix that and fix it properly. 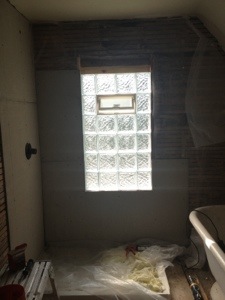 Once the window was in place, and the cement board was up we could begin the tiling of the shower.  This is a photo from this weekend and only shows a wee bit of the progress made. In the process of doing the tiling we have to cut the tile. The tile saw we had rented just wasn’t doing a good job. We got a new blade and still had poor results. After some more trial and error and experimenting with the tile shop, we came up with a solution.  Masking tape and a new saw.  We decided that since we still have a wall to tile and likely in the future other things in the house to tile, investing in a good saw was the way to go.

After getting the saw we had much better results! I managed to get this whole wall of the shower done leaving the wall with the window to tile.  I am hoping that tonight I can make some progress on that! By the weekend we should be grouting!

One thought on “The Right Tools for the Job”